ACQUISITION OF THE REMAINING CAPITAL OF LUNAR GREAT WALL STUDIOS

Nacon (the “Company”) today announces that it has reached an agreement with the partners of the Milan-based Italian video game studio Lunar Great Wall Studios to acquire 46.85% of the studio’s share capital, bringing the Company’s ownership to a 100% shareholding; Nacon has also issued new shares in connection with the acquisition of the Australian video game studio Big Ant Studios.

After acquiring a 43.15% stake in Lunar Great Wall Studios better known under its trade name “RaceWard Studio” on July 27, 2019, Nacon had acquired an additional 10.00% on October 19, 2020 from Marco Ponte, founding manager of the studio. Nacon today announced that it has reached an agreement with the partners of the video game studio Lunar Great Wall Studios to acquire the remaining equity from them in order to increase its ownership to 100% of the studios’ share capital. Lunar Great Wall Studios developed the RiMs Racing game for the Nacon Group, a realistic and ambitious motorcycle racing simulation that introduces many new game mechanics for the genre.

2. ISSUANCE OF NEW SHARES IN CONNECTION WITH THE ACQUISITION OF BIG ANT STUDIOS

Thus, the Board of Directors of the Company has decided today, using the delegation of authority granted to it by the General Meeting of the Company on July 30, 2021 under the terms of its 15th resolution and in accordance with the provisions of article L. 411-2 1° of the French Monetary and Financial Code, an issue without preferential subscription rights of 337,208 new ordinary shares of the Company, representing approximately 0.4% of the existing share capital of the Company, at a price per share of 4.93 euros including the issue premium (the “Transaction”). The subscription price for the Transaction does not involve any discount to the average closing price of Nacon shares over the 20 trading days preceding its determination.

For Alain Falc, Chairman and CEO of the Company, “This reinvestment of a portion of their earn-out payment by the Big Ant Studios selling partners is a sign of their strong support and confidence in the Company ». Following the Transaction, the share capital of the Company will amount to € 86,291,410 divided into 86,291,410 ordinary shares of one (1) euro nominal value each. The settlement-delivery of the new ordinary shares issued in the context of the Transaction and their admission to trading on the regulated market of Euronext in Paris are scheduled for October 31, 2021.

The impact of the Transaction on the distribution of the Company’s share capital is as follows: 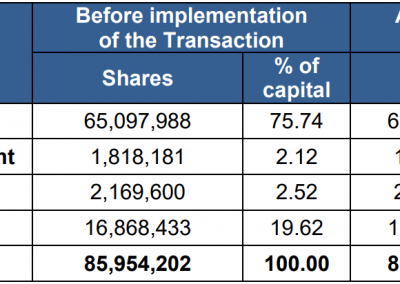 By way of illustration, the shareholding of a shareholder holding 1.00% of the Company’s share capital, prior to the issue of new shares, amounts to 0.996% after the Transaction. In accordance with the provisions of article 211-3 of the General Regulations of the Autorité des Marchés Financiers, the issue of new ordinary shares of the Company in the context of an offer referred to in paragraph 1° of article L. 411-2 of the French Monetary and Financial Code, has not led to a prospectus submitted for approval to the Autorité des Marchés Financiers. Detailed information about the Company, including its business, results and related risk factors, can be found in the annual financial report for the year ended March 31, 2021, which, together with other regulated information and all of the Company’s press releases, is available on its website (https://corporate.nacongaming.com/).

ACQUISITION OF THE REMAINING CAPITAL OF LUNAR GREAT WALL STUDIOS