At NACON Connect, the company’s first digital conference, NACON unveiled many new projects currently being developed by its internal and partner studios. And as further evidence of the company’s momentum and growing ambition, new major partnerships for peripherals were also announced.

This gamer-focused conference was held to present the future of NACON, especially the projects in development at the studios that joined the group over the last two years. These games demonstrate NACON’s desire to offer an even greater variety of experiences that meet the expectations of the most demanding gamers.

The NACON game catalogue contains a diverse selection of titles for all types of gamers, including fans of racing sims, RPGs, roguelikes, deck-builders and much more. NACON Connect raised the curtain on a number of future exciting projects.

Fans of the World of Darkness got their first look at some gameplay of Werewolf: The Apocalypse – Earthblood. Combat in this brawler centres on the character’s werewolf form: players must unleash their supernatural rage to confront world-threatening evil in the form of the petroleum corporation Endron. The game will be available on February the 4th, 2021 on PC, PS4, PS5, Xbox One and Xbox Series X.

Vampire: The Masquerade – Swansong was also featured with a dark and enthralling cinematic trailer that set the scene for this promising Narrative RPG from Big Bad Wolf.

For fans of Action RPGs, there was also good news with the announcement of Steelrising, the new project from the development studio Spiders. Jehanne Rousseau and her team place you in the heart of an alternate Paris during the French Revolution, where the automaton army of King Louis XVI is terrorising and suppressing the French people. Aegis, the main character, will fight against this reign of terror to try and change the course of History.

The Racing category was particularly well represented at the conference with two very ambitious projects revealed.

RiMS Racing is a game in development at RaceWard Studio, a Milan-based team of experts that have been developing motorcycle racing games for 20 years. This simulation is based on a unique and innovative concept that makes bike mechanics a core element of the game experience. Fans will love the bike behaviour, which has benefited from the work done by KT Racing on its proprietary game engine.

It’s confirmed: a new game in the Test Drive Unlimited franchise is in development at KT Racing. Test Drive Unlimited Solar Crown is the new ambitious project from Alain Jarniou and his team. Leveraging their experience making motorsports simulations such as the WRC series, KT Racing and NACON are offering their new vision of the franchise. Test Drive Unlimited Solar Crown retains the DNA of the series, which is based on a love of beautiful cars and the joy of driving around a luxurious island world recreated at 1:1 scale. Players will compete against each other in the Solar Crown, a competition with mysterious stakes, to elevate their character’s status within the community.

A new genre is being added to NACON’s catalogue: roguelike games.

Rogue Lords, developed by Cyanide and Leikir, takes place in a Baroque and Gothic 17th century New England. You play as the devil, who has returned to earth to fight the forces of good. Its unique art direction will appeal to fans of Tim Burton’s work.

Roguebook is a roguelike deck-builder developed by the Belgian studio Abrakam, creators of the game Faeria. With support from the renowned creator of Magic: The Gathering, Richard Garfield, who adds his expertise as the game’s co-designer, Roguebook features innovative game mechanics and a world that fans of the genre will love.

Brand-new gameplay for WRC 9 and Tennis World Tour 2, both of which release in September, was also shown. Warhammer Chaosbane, developed by Eko Software, ended the conference by announcing that the game will soon be available on next gen consoles. 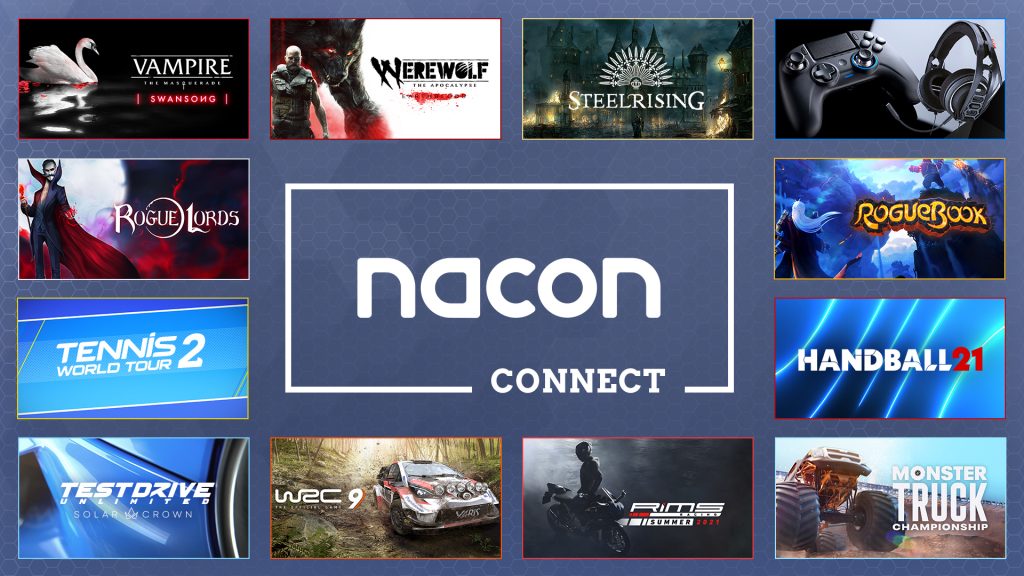 In just a few years, NACON peripherals have already won over gamers across the world. After the acquisition of RIG in March, an industry-leading headset brand for PC and console gamers, the director of the peripherals department, Yannick Allaert, today announced a prestigious new collaboration during NACON Connect.

Having already sold over 3 million officially licensed PlayStation®4 controllers, NACON is immensely proud to announce they have entered into a licensing agreement with Microsoft to create and distribute official accessories designed for Xbox One, Xbox Series X and PC.

Finally, to continue to support gamers in all their experiences, NACON is pleased to announce that the development of cloud gaming and the imminent arrival of 5G will provide many new technological opportunities for the brand. After discussions with various telecommunications operators, including Orange in France, NACON will soon be offering dedicated accessories for smartphone gaming.

Click here to get all NACON games and accessories nacongaming.com